Authorities visit to the pilot plant

On 6th March, 2022, the president of Canary Islands, Ángel Víctor Torres Pérez, has visited the Canary Ocean Platform (PLOCAN) located at Telde (Gran Canaria). Among other projects, he has visited the desalination pilot plant in which CIMNE is testing how obtaining high-purity fresh water from seawater using renewable energy within the COOSW project. In the visit has also participated Elena Máñez, Regional Minister of Economy, Knowledge and Employment of the Government of the Canary Islands.

COOSW project at a glance

The transnational cooperation project for the development of a solution that saves energy and water in coastal facilities through ocean energy capture devices (COOSW), financed by the State Research Agency, tests the technology COOL STEAM at the Canary Ocean Platform (PLOCAN). COOL STEAM is a seawater desalination system by vacuum distillation developed by the International Centre for Numerical Methods in Engineering (CIMNE).

COOSW is a cooperation project between Mexico (UNAM), the Dominican Republic (PUCMM), Germany (FRAUNHOFER) and Spain (UAB, PLOCAN, CIMNE). The project is coordinated by CIMNE and PLOCAN participates as a partner. It proposes a solution that takes advantage of natural resources such as the temperature gradient of the seawater column and the energy of the waves for the desalination of seawater and the cooling of small facilities near the coast.

The COOSW solution combines 3 different technologies: a WEC (Wave Energy Converter), a device to obtain energy from waves that is used to pump cold seawater from the deepest layers of the ocean; this cold water is used by SWAC (Seawater Air Conditioning), a technology for air cooling and finally, the temperature gradient between the colder pumped water; and the hot water produced by SWAC is used for desalination using COOL STEAM technology. 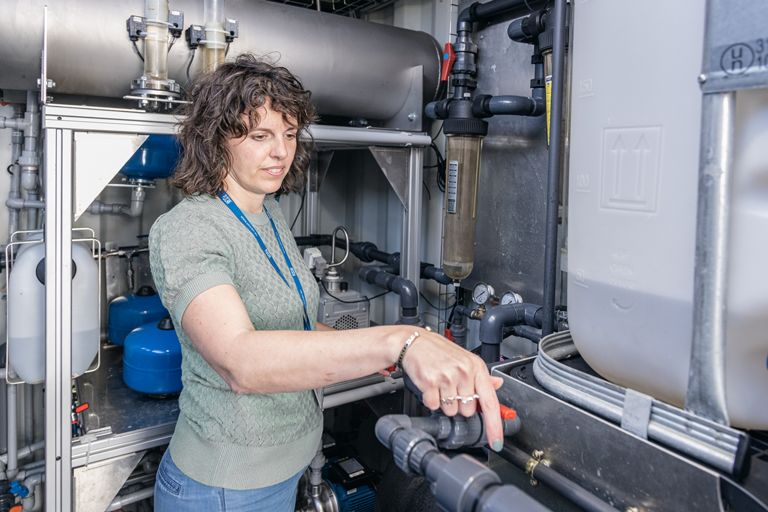 The test being carried out at PLOCAN focuses on COOL STEAM technology, which consists of a multi-stage desalination system by vacuum distillation, with an electrical energy demand of less than 1.7 kWh/m3 and that uses the gradient between the waters at different temperatures produced by WEC and SWAC technologies to its advantage.