According an UNESCO resolution, on 11th February the International Day of Women and Girls in Science is celebrated. This Day wants to recognize the critical role played by women and girls in science and technology. Coinciding with the celebration, “100tífiques” celebrates its 3rd edition. It is a dissemination initiative promoted by the Catalan Foundation for Research and Innovation (FCRI) and the Barcelona Institute for Science and Technology (BIST), in collaboration with the Department of Education of the Generalitat de Catalunya.

Within #100tífiques framework, more than 150 simultaneous informative talks will be given by more than 180 researchers from the business world and from research centers and universities (“100thes”) in 100 schools in Catalonia, mobilizing more than 15,000 students in 6th grade and 1st grade of ESO. Among them, four CIMNE women scientists will participate: África Marrero, Florencia Lazzari, Laura González-Blanco and Naeria Navarro. On this occasion of this celebration, we have interviewed them to know about their work at CIMNE and their points of view about women role in science.

What is your main motivation that moves you to participate?

Laura: When I was little I was already interested in STEM disciplines, but I never had a female role model and I would have liked. Meeting female scientists through this initiative can be very useful for girls who have such interests. I also believe that it is important to awaken scientific vocation in the little ones. Whether they are boys or girls, I think it is worth giving them a more realistic picture of how a scientist lives and works. It is a reality far removed from the cliché of the crazy, geek and disheveled scientist with which people who are dedicated to science are usually associated.

Florencia: My main motivation is to make visible the work of women in science. I think visibility is that one of the first steps is to break with the scientists stereotypes. It is important that girls and boys see women in technology to allow them to create new close references in which to be reflected themselves in the future.

África: Girls can go as far as they want and we must make visible it. That is my main motivation. The stigma that exists between science and gender must be eradicated from their minds since they are of school age. I think it is important to have women in whom we see ourselves reflected, women to admire and to whom we can say "I want to be like her". This is the way to end with the limits. All the path traveled by others makes it much easier for the new generations to achieve what they set out to do. So in my case, as a naval engineer, I believe that it is a sector where the male figure predominates and that we still have to fight hard to change minds that consider it "men's engineering" and although more and more women are studying this, we must give visibility and encourage new generations to really study what motivates them and what they want and not what is "supposed" to be theirs.

Naeria: Encourage motivation of girls who may feel the “bug” of scientific curiosity to pull that thread, without fear or barriers as "this is not for me".

What kind of challenges does participating in scientific communication events for non-scientists suppose for you and explaining your scientific work to girls and boys?

Laura: For me, the biggest challenge is to make an entertaining talk, so that they don't get bored and don't lose interest quickly. The main objective is to promote scientific vocations. I try to use audiovisual resources and also do a little experiment with the students. In addition, I think it is necessary to simplify the most technical concepts as much as possible and look for examples of everyday things that can be easily identified.

Florencia: Communication with girls and boys has always been a fun challenge for me. I would say that opening my mind to be able to receive the creativity of young minds seems to me the biggest challenge, since generally girls and boys have spontaneities which are not studied in books.

África: I think the biggest challenge is to make it attractive, close, not to create content "for children". It is to create attractive content for an audience that may not have extensive knowledge of mathematics, physics, etc., but it is a curious audience, and if we are able to arouse that curiosity and maintain it, we will have a dedicated audience with many questions that can serve as an incentive. I think that at school we all want to be doctors, firefighters, policemen,... But we never think of other professions that can generate great interest, it is to bring new horizons closer.

Naeria: First challenge to get to motivate them is to seem close to the reality of the girls and boys and to be able transmit my passion for research, so that it could represent an inspiration for them. My second challenge is to achieve an informative tone and break stereotypes about science's difficulty. The third is to make visible the reality of the researcher's life and the passion that moves those of us who dedicate ourselves to it, trying to generate interest in the work I develop and my vocation as a scientific woman.

Do you think that the increase in the presence of women in engineering research will be significant in the short, medium and long term?

Laura: I would like it, but first, I think that we, as a society, have to modify many aspects and behaviours towards a more feminist approach so that the increase in scientific women can be relevant.

Florencia: I really don't know, for me the important thing is that each generation continues to move forward from the victories of those who walked before. If women in the future do not choose science, it is because there is another area that interests them more, not because they have not even proposed it.

África: Yes, I think it is already happening and it is due to a wave of figures that have made visible the importance of analyzing the challenges from a different perspective it has been done up to now. Women are increasingly acquiring a stronger role in society (which one we should have had forever) and this is reflected in all areas of knowledge.

Naeria: The gender roles and stereotypes in which people are socialized from childhood inevitably influence their vital development. The assignment of gender roles is fading and this trend also affects the technical world. The disappearance of these sociocultural variables results in greater freedom to explore the paths that each individual is personally interested in. The number of women studying engineering has a positive but slow trend in recent years. Little by little, the ratios of women and men who study health sciences or STEM will balance. The disappearance of gender roles will contribute to increasing this speed. The consequence will be a rise in the presence of women in engineering research in the medium and long term.

According to CERCA data, the number of group leaders in the field of engineering research is 17%, a significantly lower figure than in other disciplines. What do you think are the main obstacles that a woman has to advance in her scientific career?

Laura: The main obstacles, from my point of view, are given by the greater dedication of women to family care and housework, so the time involved in the scientific career is less than for men.

Florencia: A feeling that sometimes invades me, but that I struggle to overcome, is that of thinking that I do not belong to the place of technology.

África: I think there are many obstacles but the main one is cultural, women have many roles in society (being caregivers, good daughters, good mothers...), so our achievements go more unnoticed. And when we take roles that are not culturally associated with our gender, instead of being seen as something positive, it is shown with a negative label: “the ambitious woman, who wants success” and who works to obtain it in "exchange for... everything. What we're supposed to be", culturally we are not recognized in a positive way.
On the other hand, there is the promotion that is made to us from other areas or fields, such as nursing (for having the role of care), aesthetics (for being more "feminine"), education (for that role of caring mothers) that was granted to us a long time ago and that now is when we are questioning it. In short, we do not have the same facilities as men, so the fight wears us down and makes us focus more on that fight than on achieving our goals and obtaining the same success that our male counterpart could obtain.

Naeria: It is a reality that the number of women decreases considerably as one advances in the scientific career and, therefore, rises in positions of responsibility. In research, most positions of responsibility are held by middle-aged men. Finding a place among them can sometimes be difficult for a young woman, who may feel the need to constantly prove her professional worth because it is not take it for granted that this could be her place.
The main obstacle for a woman to advance in her scientific career is motherhood, which entails intermittence that can hinder her progress. But so are the inequality of involvement in parenting and the greater burden of domestic responsibilities, which imply imbalances in the availability of time for professional dedication. However, these last two factors tend to be offset by the redistribution of domestic gender roles. 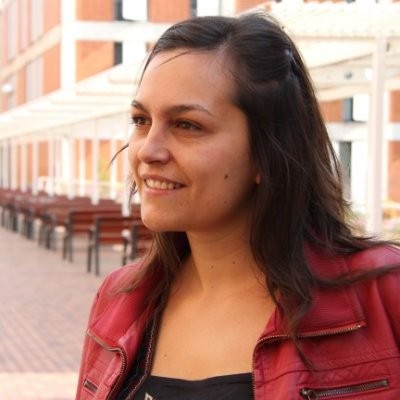 Laura González-Blanco
Her research is focused on the experimental and theoretical study of thermo-hydro-mechanical processes in natural or artificial geological materials. She has worked mainly on the characterization of the constitutive behavior of geomaterials using multiscale and multiphysics experimental techniques, as well as on coupled constitutive models applied to saturated and unsaturated materials. Currently, she is participating in two projects: EURAD funded by European Union and GAST funded by the National Cooperative for the Disposal of Radioactive Waste of Switzerland (NAGRA).

Florencia Lazzari
Modeling and optimization applied to residential electricity consumption and photovoltaic generation for the best integration of renewable energies is her line of research. The objective is to achieve more environmentally sustainable and socially more democratic cities, in which we citizens empower ourselves with the energy resource by forming neighborhood communities. 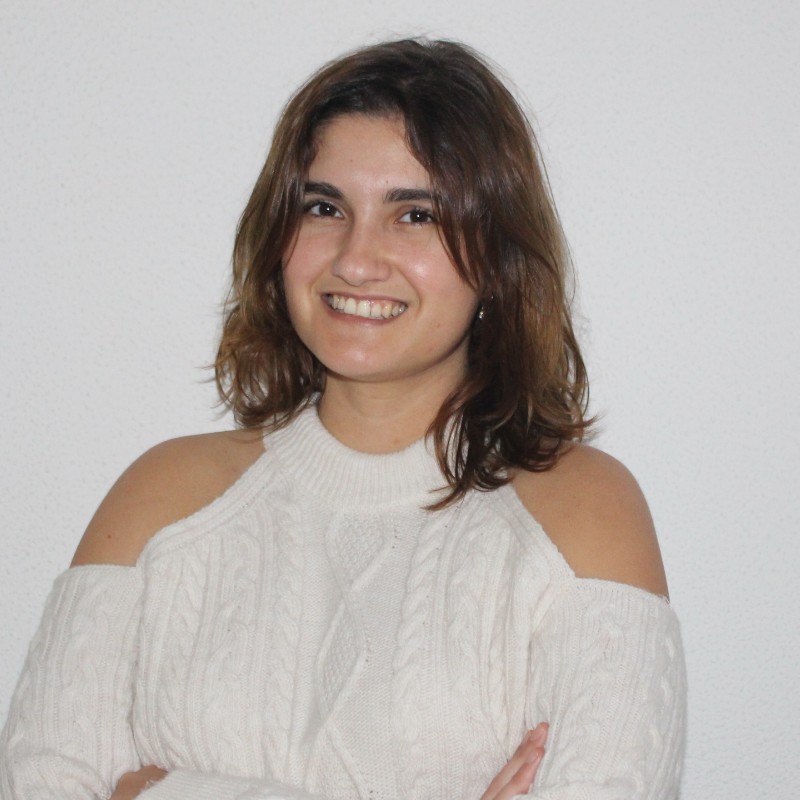 África Marrero
She works within the CENIT group of CIMNE and her research line is sustainable maritime transport. She is the principal investigator in LASH FIRE, an European project (H2020, agreement nº 814975), where she is in charge of a WP on the prevention of fire ignition in ro-ro cargo ships. In addition to research tasks, she manages the WP not only the team formed in CIMNE but also the rest of the partners involved in the WP. She carries out projects related to port sustainability for the European Commission, for IDB Invest and for the Port of Barcelona. 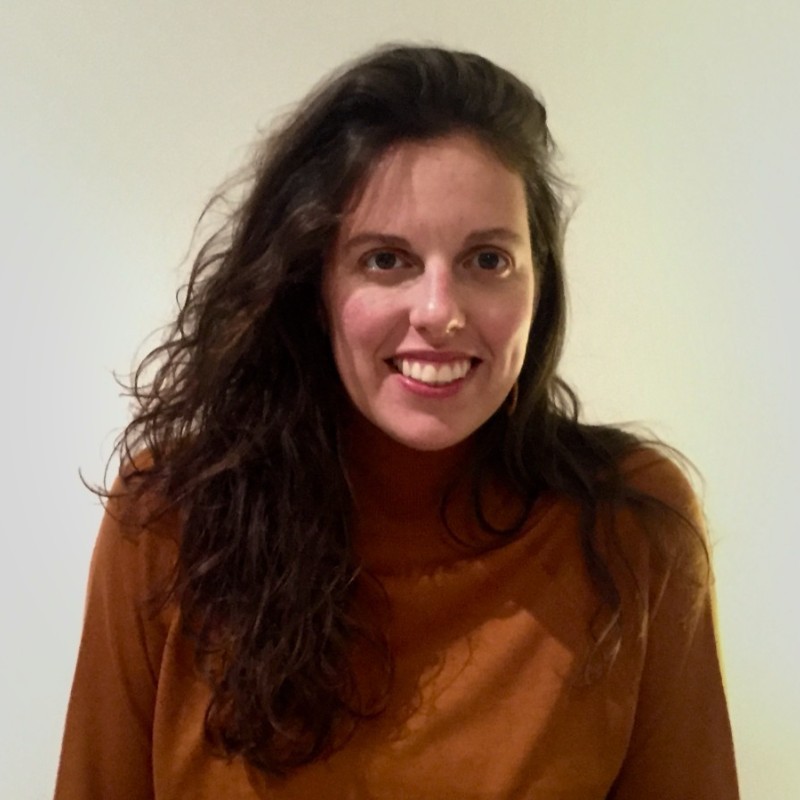 Naeria Navarro
Her research is focused on the development of new vacuum distillation technologies for water desalination and purification with low energy consumption associated to achieve environmentally sustainable solutions. She performs technology transfer activities from FWN (CIMNE's Spin-off). The projects in which she participates currently are APOEMA (funded by AGAUR) and COOSW (funded by ERANet).