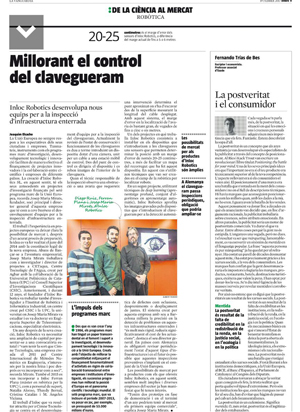 On 19th February, 2017, INLOC Robotics has been appeared highlighted by the Spanish newspaper La Vanguardia in its section ‘From the science to the market’. The company was founded by Josep Maria Mirats, doctor in Telecommunications Engineering –specialized in electronics– with a longstanding experience as a researcher in European projects.

The core business of INLOC, 5% owned by CIMNE Tecnología SA since October 2015, is based on the development of positioning and navigation solutions for mobile robots in buried environments. From March 2016, INLOC is working in a new system of detection and classification of defects in sewer systems based on Deep Learning techniques. The system allows to locate faults or obstructions more accurately: if the current system based on measuring the length of the cable deployed has an accuracy of five or six meters, the position sensors studied by INLOC reduce this distance to 20-25 centimetres.

The possibilities for products such as those offered by INLOC Robotics in the market are extensive. Various companies in the sector have already indicated their interest in them: "We have two projects under demonstration and, within a year, we could have the first commercial devices on the market", explains Josep Maria Mirats.