Particles 2017 brings together some 350 experts

From 26th to 28th September 2017, the V International Conference on Particle-Based Methods (Particles 2017) was held in Hannover, Germany. The meeting was co-organized by the Leibniz University of Hannover (LUH) and CIMNE. Prof. Peter Wriggers from LUH, a member of the Advisory Scientific Council of CIMNE, was the meeting Chair.

Some 350 experts participated in this congress that addressed both the fundamental basis and the applicability of state-of-the-art particle-based computational methods. 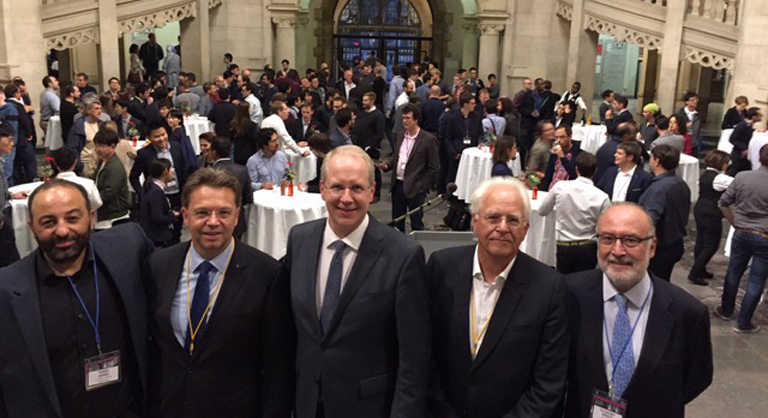 Among the institutional events that took place during the conference, we highlight the reception offered by the Lord Mayor of Hannover, Stefan Schostok, to the conference delegates. The reception was also attended by Prof. Wolker Epping (Rector of the Leibniz Universität Hannover) and some members of the organizing committee of Particles 2017, namely Peter Wriggers (Professor at LUH), Eugenio Oñate (Director of CIMNE) and Tarek Zohdi (Professor of Mechanical Engineering at the University of California, Berkeley).

"Particle-Based Methods" can be effectively used for solving a variety of problems in engineering and applied sciences and, basically, stand for two different computational models in solid and fluid mechanics.

On the one hand, the name “particle methods” represents discretization techiques for solving a problem solid and fluid mechanics in which the response of a continuum is projected onto "particles" carrying the mechanical information during the continuum deformation. Typical representatives are Meshless Methods, Smoothed Particles Hydrodynamics (SPH), Moving Particle Simulation (MPS), Particle Finite Element Method (PFEM), Material Point Method (MPM) and the Lattice-Boltzmann-Method (LBM).

On the other hand, the notion expresses the computational representation of physical particles existing on different scales. Classical versions are Molecular Dynamics (MD) or the Discrete (Distinct) Element Method (DEM). Here either the particles exist a priori like in granular matters or they evolve during the loading process. In some cases the two models of discretization and physical particles are even interconnected.

The Particles 2017 conference covered both concepts because of their strong interrelation in their computation as well as application point of view. The next edition of the conference will take place in Barcelona on the second half of September 2019.